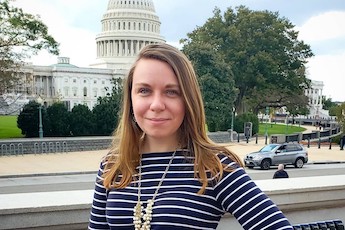 The California Catholic Conference (CCC) is pleased to announce that Molly C. Sheahan has joined the Conference as Associate Director for Respect Life.

"Molly brings with her an expansive background advocating for life issues that will enable her to make a strong impact on legislation in the Capitol," said CCC Executive Director Kathleen Domingo. "The Conference is thrilled to have her on board to strengthen our life and dignity advocacy efforts."

Sheahan speaks nationally on human dignity concerns, and her writings have appeared in The Public Discourse, Angelus News, Grotto Network, Rehumanize International, and other publications. She is also the founder of We Are Pro-life Women, a new media movement highlighting the stories of underrepresented pro-life women.

"I'm thrilled to be back in my hometown of Sacramento and lobbying for the bishops on life issues," Sheahan said. "It's why I get up in the morning; getting to advocate for the life and dignity of the human person, especially the most vulnerable."

Sheahan most recently served as a lobbyist for the Maryland Catholic Conference. She previously worked for the Archdiocese of Los Angeles overseeing a portfolio of all pro-life and social justice issues, as well as organizing the annual OneLife LA walk for life. She has also interned on Capitol Hill in the U.S. Senate and the Congressional Coalition for Adoption Institute.