All Hands On Deck to Defeat SB 380 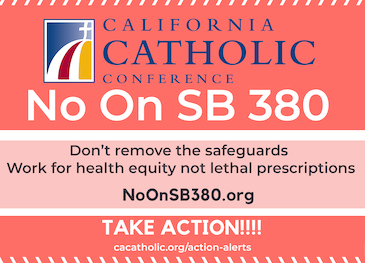 The legislative session ends next Friday, and we will see a flurry of activity at the Capitol this coming week as bills are either passed and sent to the Governor or meet their end for this round.

The CCC is asking for all hands on deck to defeat SB 380 , the bill extending physician-assisted suicide. The emails sent to legislators have made an impact. Thank you for your emails that helped force an amendment to the bill to put back in a sunset date, which proponents initially sought to remove. Now, with your continued help, we can defeat this bill.

There is no question that this bill will hurt all Californians, but it will do so disproportionately to the vulnerable and disadvantaged. Instead of addressing shortfalls in Medi-cal funding for those most in need, the State is choosing to focus on extending end-of-life options. This demonstrates a lack of compassion for those amongst us who need it most.

Click here to tell your legislators that we cannot subject the vulnerable to abuse with this bill.

As reported last week, we would also like to thank the thousands who sent email alerts to lawmakers on SB 245, the bill that would have ended abortion co-pays in the state. This bill became a two-year bill, and while it will still be a threat next year, getting it stalled is partly thanks to the thousands of emails that were sent. Every alert counts, so thank you to all who heeded the call.

Stay with the CCC as things rapidly change during the last week of Session.