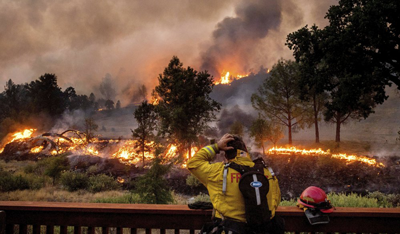 California is a leader in correctional justice reform and the Church has been a strong voice in that effort.  Recent reforms have produced many policies aimed at preparing incarcerated people to return safely and productively to the community while simultaneously expanding services to help crime victims heal and recover.

Proposition 20 on the November ballot will reverse that progress, threatening to return California’s correctional system to the overcrowded, expensive, and revolving-door system of the past.  For this reason, the California Catholic Conference is opposing Prop 20.

Problems in the old system were so severe that a federal judge took over control of inmate medical service at one point.  California voters and lawmakers, however, began gradually reforming the system by enacting more than a dozen bills or ballot initiatives - such as Prop 47 (2014) and Prop 57 (2016) - that have prioritized local public safety programs over long prison sentences.

The multiple wildfires ravaging Northern California is causing tremendous damage to communities, including parishes throughout the region. Several dioceses, as detailed in this Angelus News article, have seen extensive damage, and the threat is not yet over as the largest fires are less than 40 percent contained and new evacuations are being ordered.

Life in these areas have already been disrupted from the toll of COVID-19. Now they are reeling as they sort through the ashes the fires have left behind. Please consider using the links below to support Catholic efforts to bring relief to these communities.

Catholic Charities of the Diocese of Santa Rosa

September is National Suicide Prevention Month. There’s no question that in addition to COVID-19, natural disasters, the economic downturn, and lifestyle changes like distance learning have created a great amount of anxiety. It’s okay to not feel okay, and it’s to talk to someone. The National Suicide Prevention hotline number is 1-800-273-8255. There is also a chat line available.

In addition, the State has a website devoted to emotional support during the pandemic and includes resources for those with anxiety, youth and teens, older Californians and those at risk for domestic abuse. Don’t shoulder these burdens alone. Reach out today.

California is among the few states that allows certified midwives to include abortion care under their scope of practice. California is one of only 12 states in the country where abortions are allowed by someone other than a licensed physician. Now AB 1237 allow abortions without even the supervision of a licensed physician. Ask your representative to protect women and the unborn by rejecting this increase to abortion access.

Oppose the Funding of Sex Changes

AB 2218 uses taxpayer dollars to fund nonprofits, hospitals, and health care clinics that provide transgender-identifying minors and adults with sterilizing transitioning drugs and surgeries. Tell your senator that in the middle of a budget, economic, and health crisis, AB 2218 should not be prioritized.